GMHC co-founder Larry Kramer—in the form of a giant new Pride Puppet—made his debut marching with our contingent at the New York City Pride March in June to mark our 40th anniversary as the world’s first HIV and AIDS service agency. 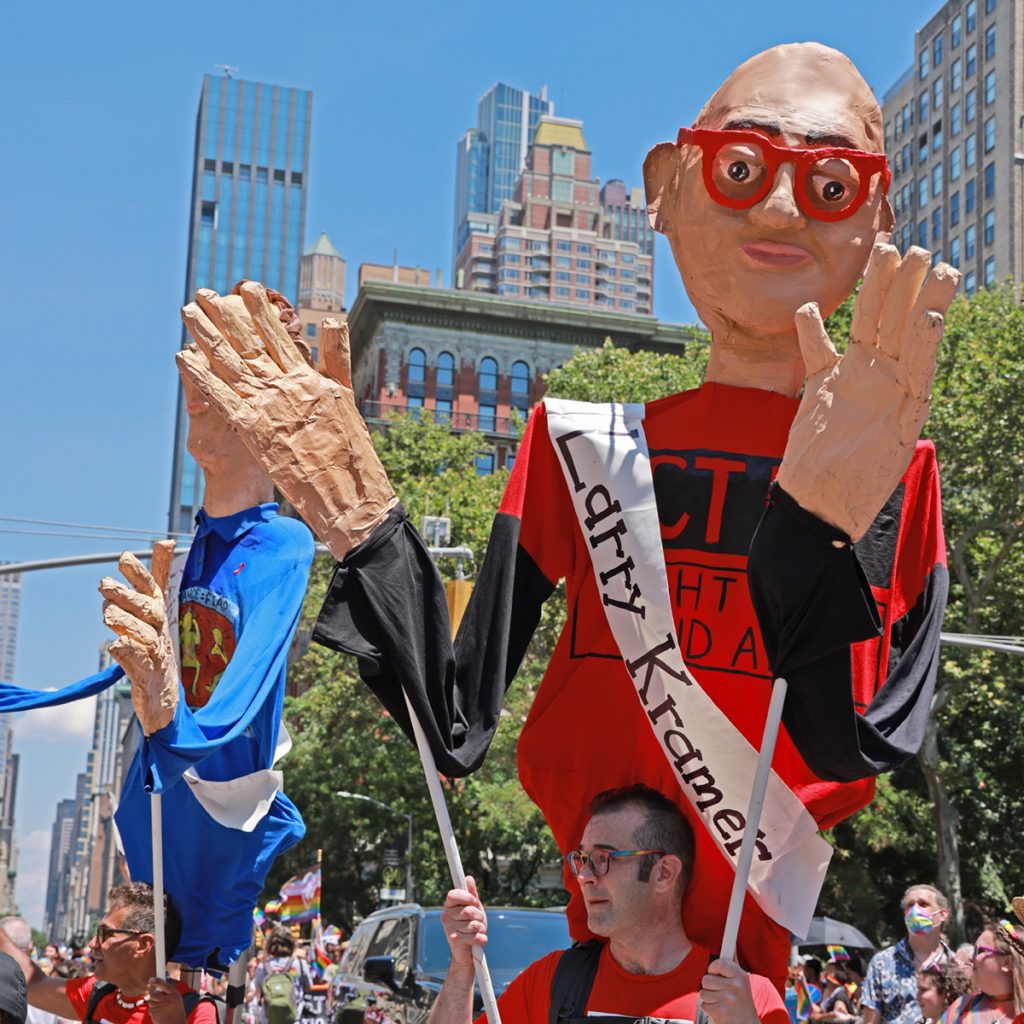 The new Kramer puppet was part of a colorful crew of LGBTQ+ heroes and AIDS activists immortalized in 10-foot-tall Pride Puppets. He bobbed and waved above the crowd with Stonewall gay liberation legends Marsha P. Johnson, Sylvia Rivera, Stormé DeLarverie, and AIDS activists like Keith Haring.

Made out of paper mâché clay, wire, cloth and a whole lot of creativity, the Pride Puppets sprang from the fertile imagination of Christopher Williams, an artist and arts educator, as a fun way to “educate about and celebrate these heroes and activists in our LGBTQ history,” he said, both in the struggles for LGBTQ liberation and fighting the HIV and AIDS epidemic.

“Larry was such a monumental figure in the fight against AIDS. It’s fantastic that we can make him a monumental, larger-than-life puppet that’s continuing the fight,” Williams said.

The Pride Puppets have quickly become a beloved tradition at the city’s LGBTQ events since their first appearance at the NYC Pride March in 2019, appearing most recently at the Big Mix, a Pride event at Little Island directed by Tina Landow.

Four actors played LGBTQ Legends of the Movement from the Stonewall Uprising—Johnson, Rivera, DeLarverie, and Miss Major Griffen Gracy—and then giant puppet versions, anchored by the Statue of Liberty Pride Puppet, appeared to close the act.

“It was legendary,” Williams said.

Whatever the event, the Statue of Liberty always joins. “She’s an iconic New York City landmark,” Williams explained. “We need to make sure liberty and justice for all is included in our LGBTQ fight for equality. She needs to be in our corner.”

Williams and his crew of volunteer puppet-makers made a sash for her out of a Progress Pride flag and used another for her cape. “Now she’s decked out as LGBTQIA+ Lady Liberty,” he said.

Williams said the idea for his tribute to LGBTQ heroes and activists had been percolating for years, sparked by the Bread and Puppet Theater from the early 1960s. “It recalls the beginnings of Pride, when people did fun and interesting things to celebrate,” he said.

In 2019, as Stonewall’s 50th anniversary approached, Williams won an arts education grant from the Lower Manhattan Cultural Council to make the puppets, partnering with Teatro SEA–Society of the Educational Arts on the Lower East Side for workshop space.

He enlisted artist friends and LGBTQ youth from The Ali Forney Center and The Door, which provide housing and supportive services for at-risk young people, to help him do some research and decide what puppets to make first. They decided on Marsha P. Johnson and Sylvia Rivera and then designed prototypes.

For the puppets’ heads, the puppet-makers now use Worbla, a thermoplastic that is easier to mold and a bit lighter than paper mâché. For the torsos, they build an armature of wood and PVC pipe for the spine, shoulders, and neck, attached to a hiking backpack for volunteer puppeteers to wear.

“They’re very ergonomic because they distribute the weight,” Williams said, adding that each puppet weighs about 20 pounds.

Each puppet is garbed in a super-extra-large T-shirt – the idea of Jeremy Bailey-Smith, an Australian costume-designer volunteer – with collars attached from shirts that Williams finds thrifting.

Williams and his band of puppet-makers started designing the puppets in March 2019, and by June they’d created 25 Pride Puppets for WorldPride NYC 2019. But the Pride Puppet contingent got a bit lost in the massive crowd, he said, and didn’t make the impact he’d hoped.

The following year, the NYC Pride March was cancelled due to the COVID-19 pandemic, so the puppets joined the more grassroots Queer Liberation March, which is much smaller. “The crazy, fun energy of my puppets jibed with that crowd, and we got a lot of press,” Williams said.

It was the Queer Liberation March’s organizer, Jay Walker, who introduced Williams to GMHC’s community relations director, Krishna Stone. She invited the Pride Puppets to join a World Aids Day event she was organizing for Dec. 1, 2020.

“I was looking for new ways to get the puppets out there and educate people,” Williams said. “I’m excited to have the connection with GMHC, because they’ve done so much great work throughout the movement to help people.”

After World AIDS Day, the Pride Puppets joined GMHC for AIDS Walk New York in May—back in person this year for the first time since 2019–and then Williams debuted the Larry Kramer puppet with our contingent at the NYC Pride March.

Williams said he made the new Larry Kramer puppet to add more AIDS activists to his troupe. “I wanted a puppet to highlight the fight that we’re still up against with HIV and AIDS,” he said, adding that Stone suggested Kramer, as the co-founder of GMHC and then ACT UP.

“He was an out-there, creative person already, so perfect to make into a puppet,” said Williams, who discovered that Kramer was a playwright as well as an activist. “He was such a mover and shaker at getting things done.”

The Pride Puppets are making their next appearance at the Stonewall National Monument on Aug. 24 to celebrate Marsha P. Johnson’s birthday. To volunteer as a puppeteer, contact Williams at jcw.arts@gmail.com or on Instagram @pride_puppets.