The Pandemic’s a Drag, But a Drag Queen Can Help

From his roots in musical theater, Courter Simmons has become one of New York’s loudest and proudest live-singing drag queens. When the pandemic forced AIDS Walk New York to go virtual, his alter ego, Cacophony Daniels, came to GMHC’s aid in a fabulously resourceful way.

AIDS Walk New York is one of GMHC’s most important fundraisers, but when COVID-19 shut down the usual convivial in-person event at Central Park, Simmons pitched in to organize a virtual drag show, “Queens Squawk for AIDS Walk”, as a team fundraiser.

Simmons said he called a few of his draq queen pals—Sutton Lee Seymour, Paige Turner, Evita Loca, Jacquie Cox and the Provincetown staple, Miss Richfield 1981—and “put together this little show that raised a few thousand dollars for GMHC.”

That led to a holiday fundraiser last year, aptly titled “Bye 2020!”—and then another Queens Squawk virtual show last spring for AIDS Walk New York 2021. “It was a lot of fun, and we raised some good money for GMHC,” Simmons said.

Courter said the drag fundraisers for GMHC were a way to give back. “I came of age in a time when HIV and AIDS were still a really scary thing. The only treatments had severe side effects that made the disease even worse,” he said.

“When I moved to New York as a young, out, gay, sexually active man in 2001, I used GMHC’s testing and counseling services. It’s important to me to pay that forward,” said Simmons, who grew up in Milpitas, California.

GMHC “has been a really important lifeline for a lot of people,” during the pandemic, he said.

“People need help with food and rent, and GMHC really stepped up with the Grab n’ Go meals program,” Simmons continued, adding that the agency’s counseling services, now online, and HIV self-test kits have made a crucial difference for many New Yorkers’ health and well-being.

Simmons actually did his first GMHC fundraiser soon after moving to New York 20 years ago, performing in a gay version of Grease on Fire Island. “It was pretty terrible, but we had a fabulous time anyway,” he said.

Then, in 2013, he and his husband Jason Cianciotto, GMHC’s vice president of communications and policy, started the GMHC Howard Ashman Award & Cabaret, an annual star-studded event at Joe’s Pub that features Broadway actors and celebrities performing Broadway classics to raise money for HIV/AIDS services.

Cacophony sprang forth from Simmons’ experience in musical theater and cabaret. Early in his acting career, he performed in New York cabarets for fun.

“It was a great way to get my chops as a singer,” he said. “Nothing prepares you for an audition room any better than singing for a bunch of drunk people in a piano bar!”

Simmons went on to play Frankie Valli in Jersey Boys, joining the first national tour in 2007 and then performing in the Canadian, Las Vegas, Broadway, and Off-Broadway companies. It was during the national tour that he started doing drag with other show members after hours.

Many in the company traveled with a Tivo just to record Ru Paul’s Drag Race in the pre-streaming days. That inspired them to throw a drag party, where Simmons and other superfans “went all out,” he said, carving foam for hip padding and learning how to do proper makeup.

“That’s where Cacophony was born,” he said, adding that her name was inspired by the show’s music director, who kept telling Simmons he was singing too loudly.

Cacophony’s fashion sense is as loud as her voice, and she rarely repeats an outfit. Simmons, who’s created all 19 of her sky-high wigs, said he’s lost count of how many dresses she owns. “I’d say at least 50, but probably more.”

After winning a drag queen singing contest, Cacophony started co-hosting her own shows. She won a Bistro Award in 2017 for her cabaret tribute to Howard Ashman, “Under the ‘C’”, and in 2018 began performing on cruise ships all over the world.

But then the pandemic struck, shutting down live performances. At the suggestion of drag event producer Sky Casper, Cacophony started livestreaming virtual shows every Tuesday night at 8 pm on Facebook and built a loyal following. “Cacophony LIVE in Isolation,” which now also streams live on YouTube, Twitter, and TikTok, is at 72 episodes and counting.

“It was a way to scratch that performing itch that I always have, and try to make a living,” Simmons said.

The livestream audience has dwindled as New York reopens, and Cacophony has returned to performing live, co-hosting “Schmoozical Mondays” at a club called, ironically enough, Hush on West 52nd Street.

Simmons hopes to keep Cacophony’s virtual shows going, at least monthly, for her online fans. “It’s a good space for people who for various reasons can’t be out in bars,” he said.

Simmons is sharing his performing chops with the next generation. He and Cianciotto adopted a son, who’s also LGBTQ, just a month before New York’s first RuPaul’s DragCon in 2017. Their son asked to go in drag, so Simmons made them matching sequined gowns, accompanied by Cianciotto with a glitter beard. 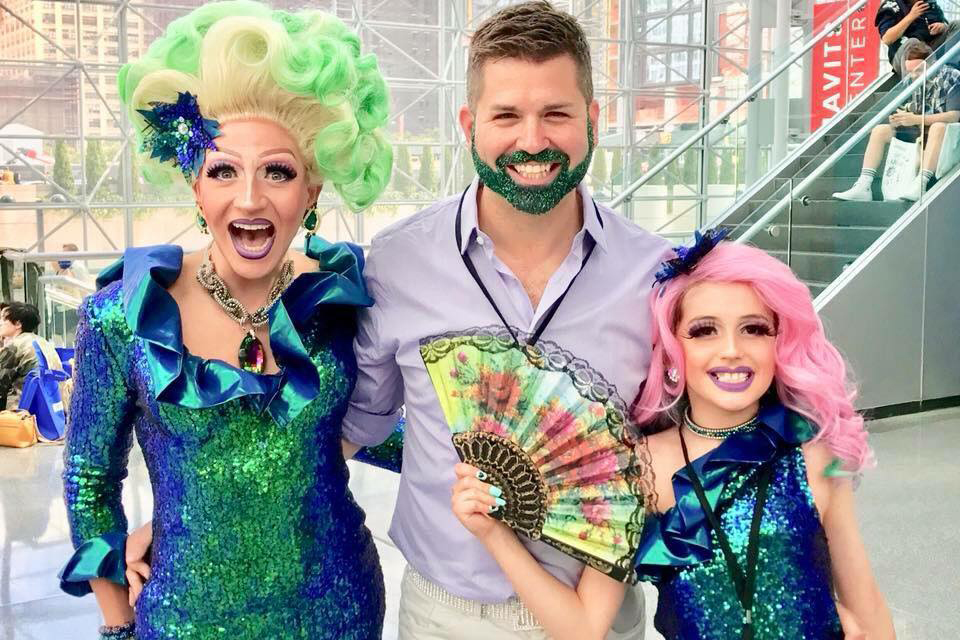